Our range of plastic sheet piles are applicable for any traditional sheet piling application where:

The nature of plastics tends to lend themselves to water based applications, such as scour and erosion control, bank protection and revetments, and of course a number of ponds and lakes for the leisure and fisheries.

Our product ability to be driven long lengths has lead to considerable success in flood defence and generic cut-off wall applications.  Our success has also been land based with the first plastic sheet piling used on the M1 and M6 motorways.

The following case studies provide some insight into applications that have benefited from our advanced products and methods.  One trend that is very evident is the contruction of structures using our plastic sheet piles, paricualarly water control structures.  The ability to drive and then reinforce our plastyic sheet piling using the THE system hybrids and created a whole world of new possibilities.

This was one of our first applications into ditch blocking for peat restoration.   This is an area dominanted by the cheapest of plastic sheet piling, the economy Z pile.   MultiLock plastic sheet piling, now our best selling product, was very much the new untested product, yet it was clear that it offered superior performance both in terms of installation of the plastic pile and also as a structural element. 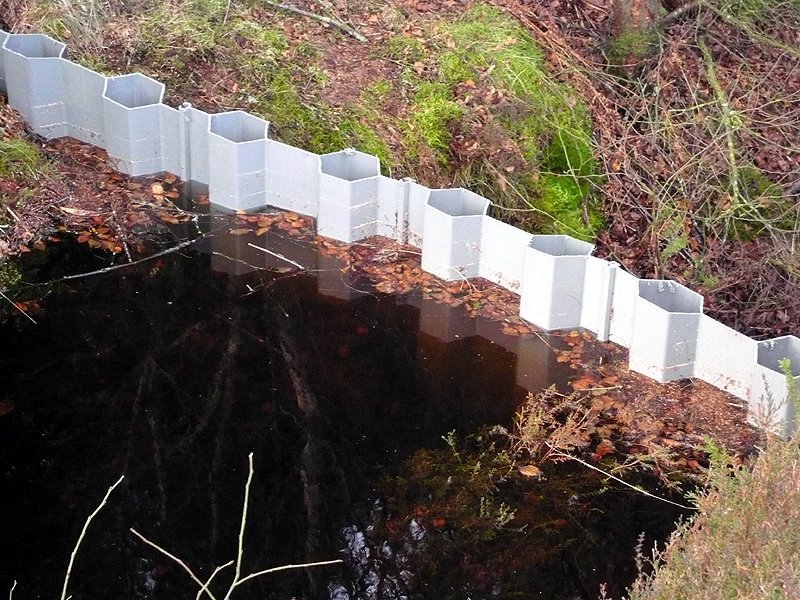 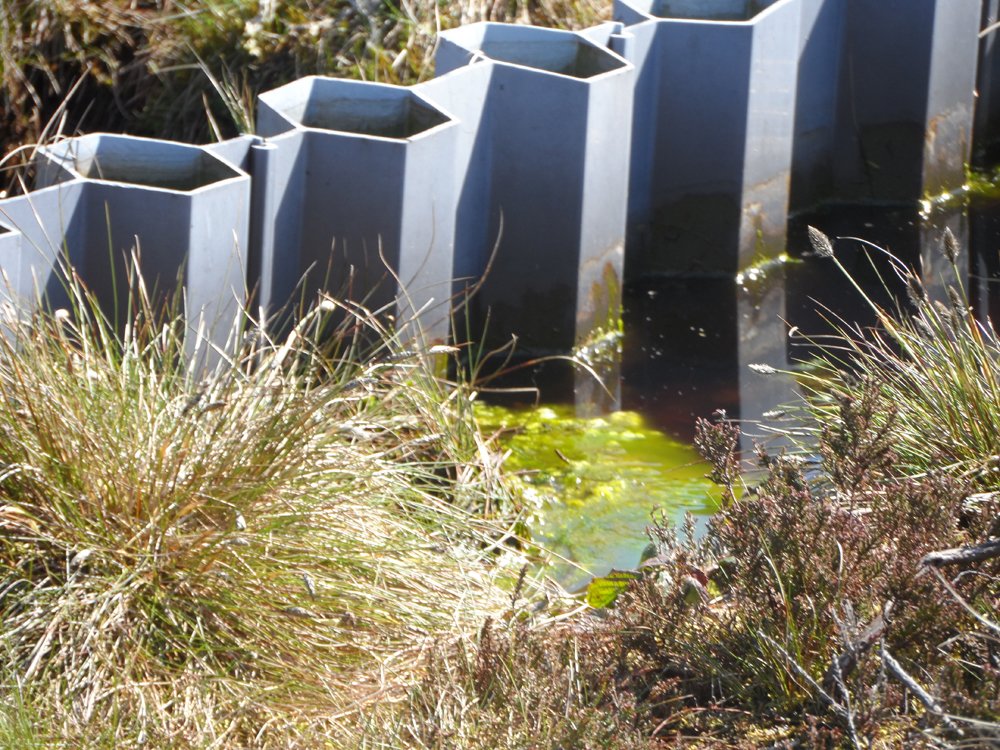 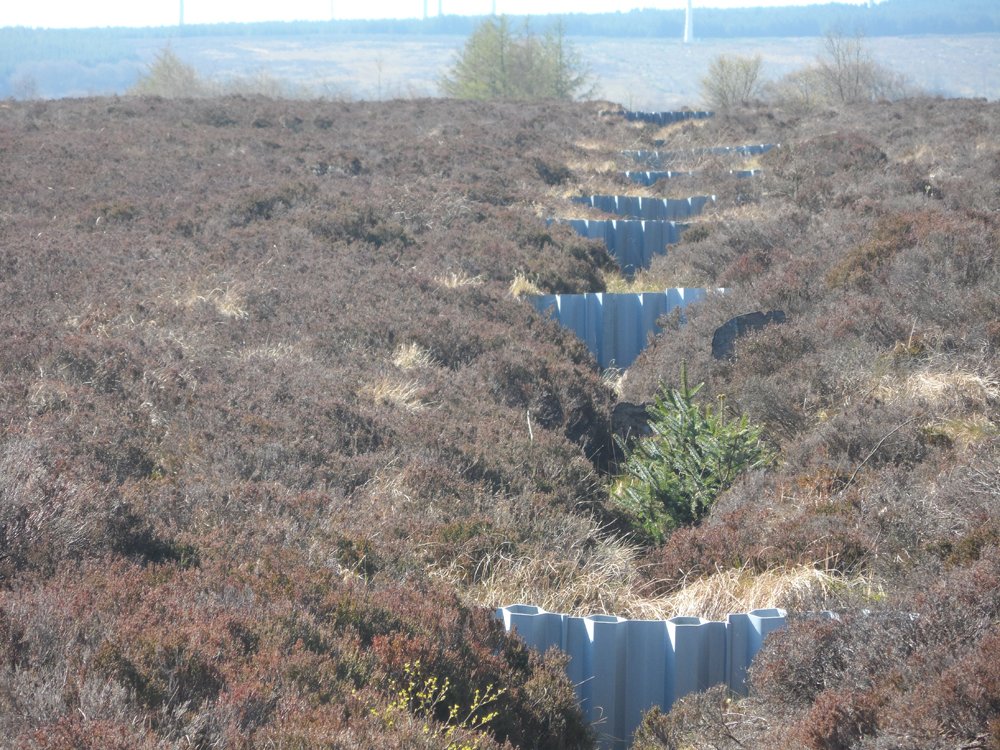 Since 2008 the Friends have installed 30 dams in the Moss to replace dams which had either been vandalised or had broken as a result of weather conditions. Since installation there has been a marked difference in the water level in those areas where the new dams are. This has necessitated the need for safety signs to alert the public to the depth of the water in the ditches.

Farming Floodplains for the Future is an important national pilot project. Its aim has been to understand, through delivery, how the farmed landscape can be viably managed in ways that reduce flood risk downstream, whilst enhancing the natural environment. A partnership project hosted by Staffordshire Wildlife Trust, it has been funded by Defra through its Flood and Coastal Erosion Risk Management Innovation Fund.

Staffordshire Wildlife, Matt Jones, contacted THE Plastic Piling Company to assist in their Farming Floodplains project.  Whilst plastic sheet piling is an established damming technique for ditch blocking, part of this scheme required the creation of several plastic piling dams that needed to provide adjustable water levels.   As the floodplain would only have a raised water level for part of the year, the requirement that it be returned to normal for farming was paramount.

The Standard Z pile, such as the EcoZ is perhaps the one plastic pile most commonly associated with this application.  Within conventional ditch blocking the EcoZ has been found to provide a solution providing longevity with good water tightness.   In this application, the conceived design would have its middle pile sections split, with two removable short pile lengths to create an opening like a basic sluice.  As a result, is was doubted that the standard Z pile would have sufficient rigidity to create a seal under tension.

MultiLock Plastic sheet piling, became the obvious choice as its strength rating is within that of the basic Z pile in a box format, and its tubular design provides more cross sectional area.  This tubular design creates a greater vertical rigidity that enabled a section of MultiLock Pile cap to be mounted on top, pushing this section onto the rubber strip and pile below, creating an effective seal.

The ability for MultiLock to be reinforced with timber posts was also considered a great advantage, as the lateral strength of the dam could be increased at the centre to allow for better location and support of the centre mounted shorten piles. 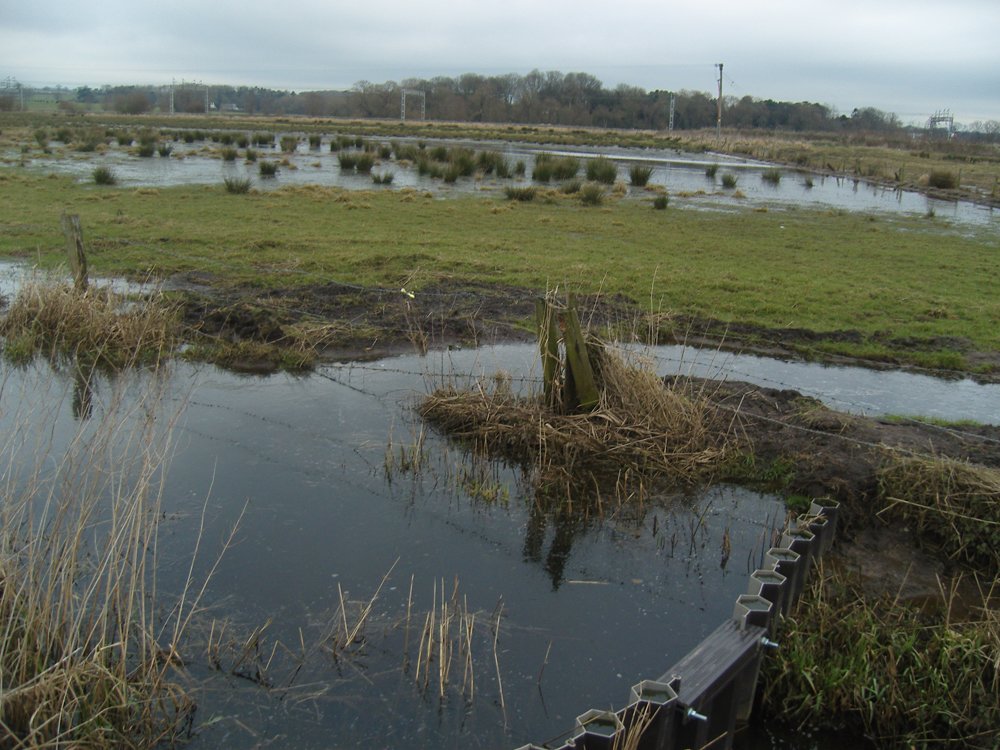 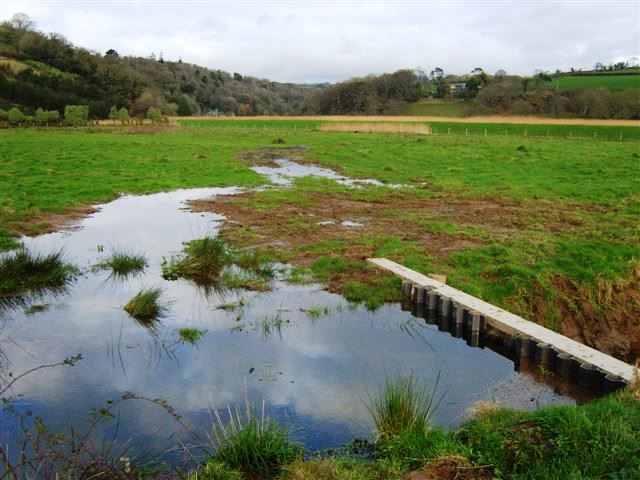 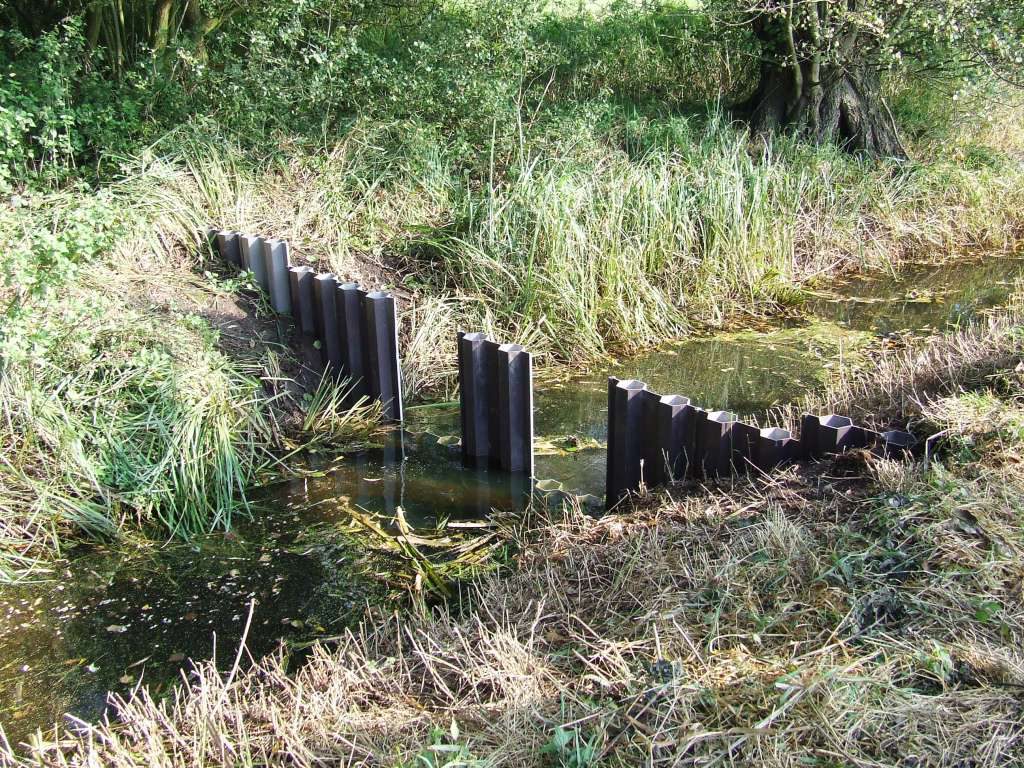 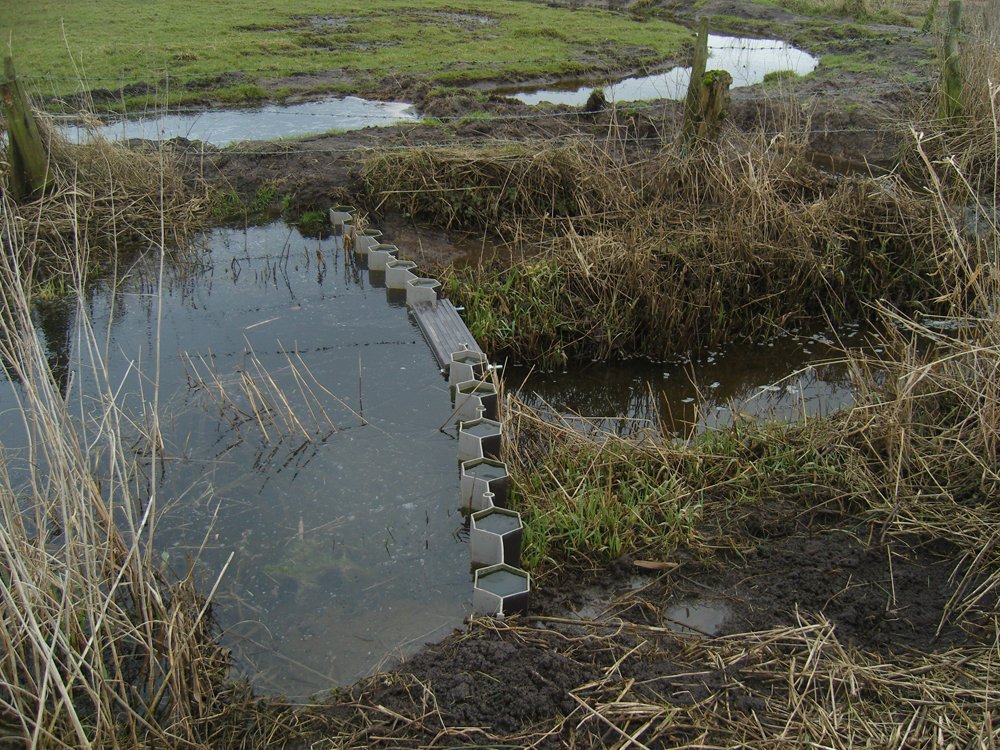 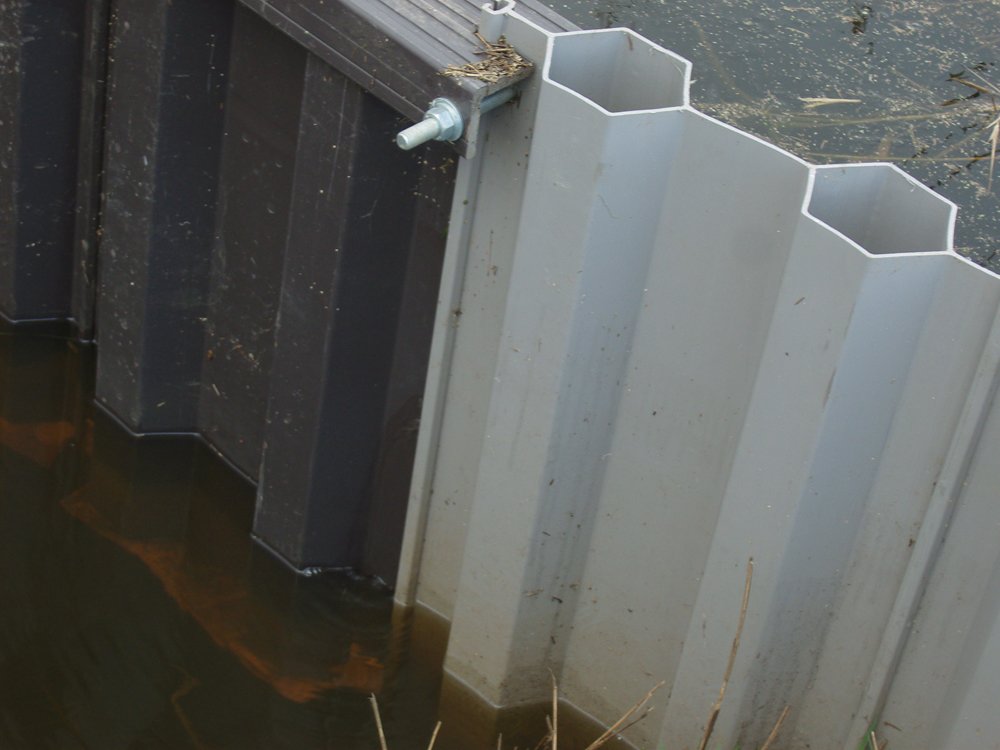 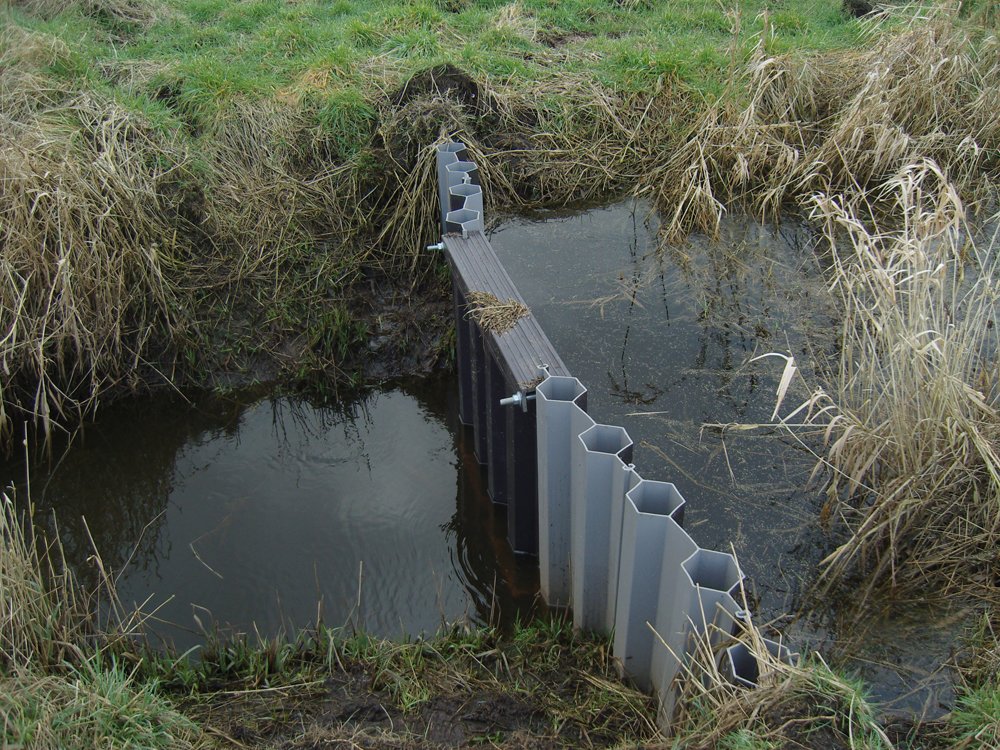 This partnership project, in the Vale of Pickering aims to rehabilitate a nationally-important wetland landscape through sensitive farm management. It will make the Vale a richer place for wildlife and more attractive and accessible for all.

Tim Burkinshaw contacted THE Plastic Piling Co looking for advice on suitable products for construction of water control sluice on a wetland restoration scheme. The site was on lowland peat farmland, drained by a network of ditches of trapezoidal x section. MultiLock plastic sheet piling was again recommended both by The Plastic Piling Co and also Matt Jones of Staffordshire Wildlife.

The Project’s fourth and most substantial water control structure, to date, was completed in November on Grove Farm, Cayton. The drop board-style sluice was designed by the Project Officer, to cope with the particular challenges of the soft, permeable peat soils on site. The sluice consists of a dam of sheet piling made of recycled plastic, into which is fitted a bespoke metal frame, fabricated in Scarborough, to receive timber boards.

Tim stated “We finally got the dropboard sluice in this month in a dry spell. Thanks to David Coley at THE Plastic Piling Co and to Matt Jones for advice on plastic pile sluice designs. We ended up using 6 x 3.0m and 6 x 2.0m pile lengths. Shorter piles used in centre (2 piles sunk to few inch above bed) and at outermost positions. Used some 3mm rubber strapping (tree tie roll) to add seal between boards and the metal frame 1.0m x1.5m was fabricated locally to fit piles. The seal beneath metalwork simply formed by 2 lengths of pile capping over on the machined tops. The frame was a tight fit at sides, so no significant leaks – didn’t use any sealant. Softwood dropboards can be moved by hand from gangplank, and held in place by chocks. On test overnight, it raised up half a metre head, despite leaky boards. 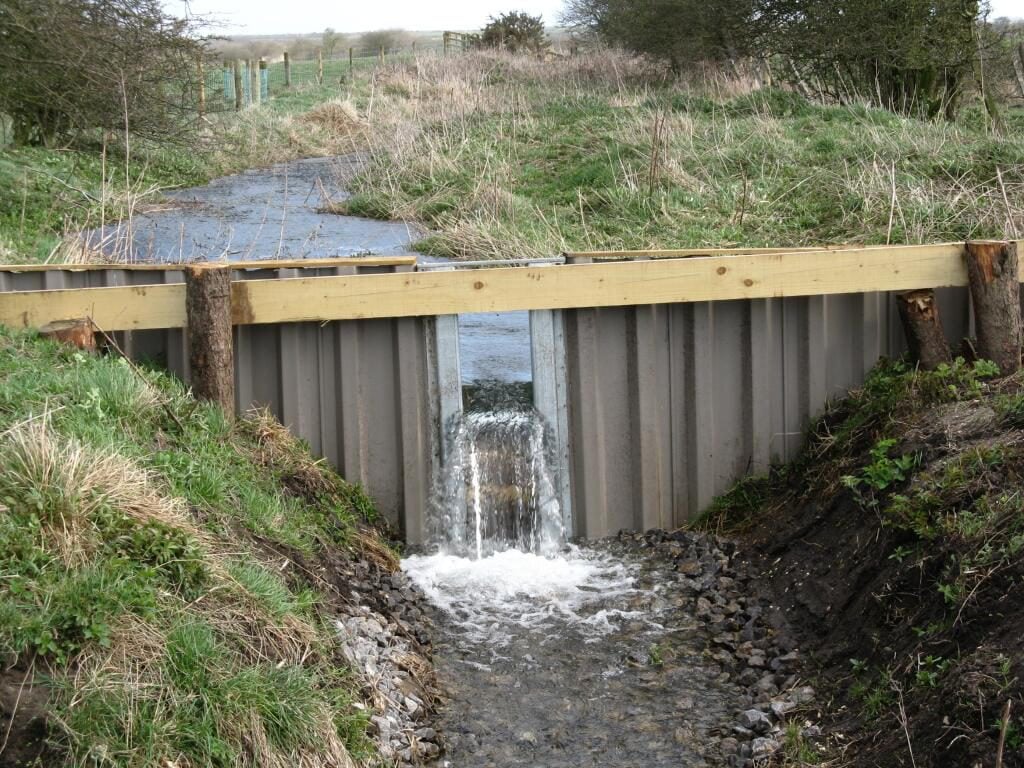 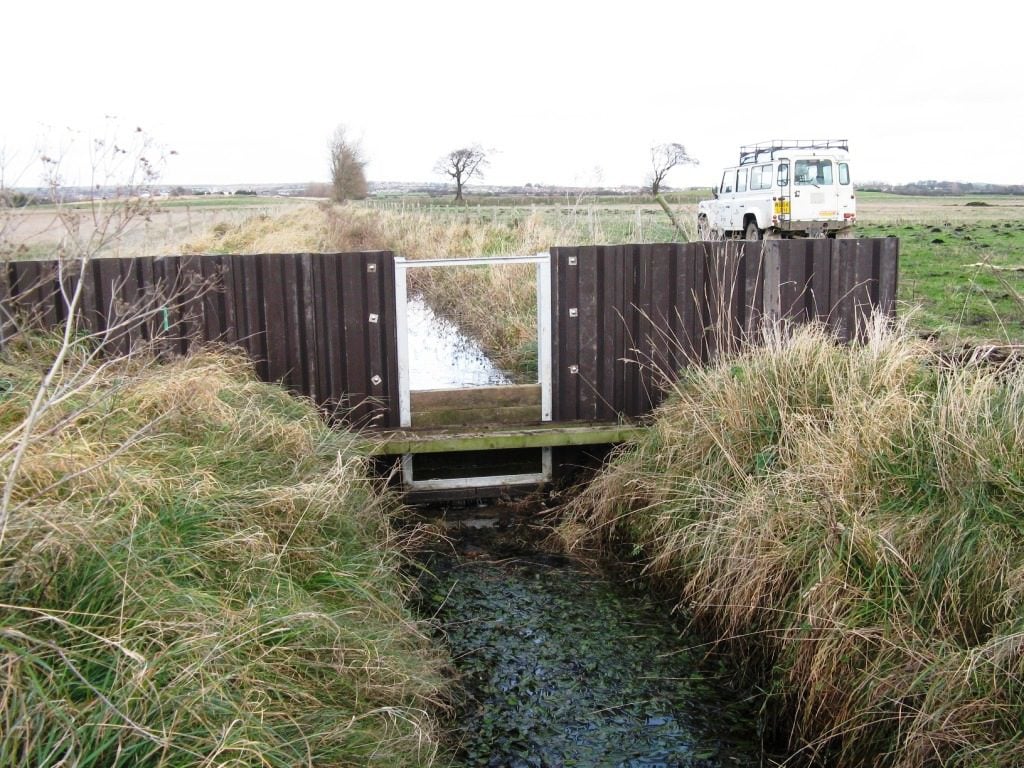 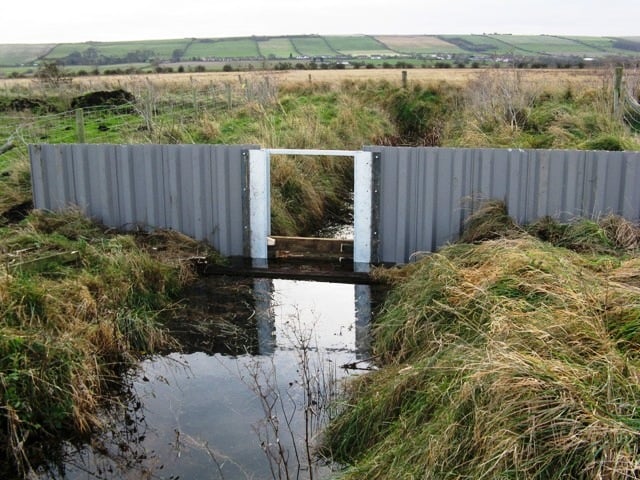 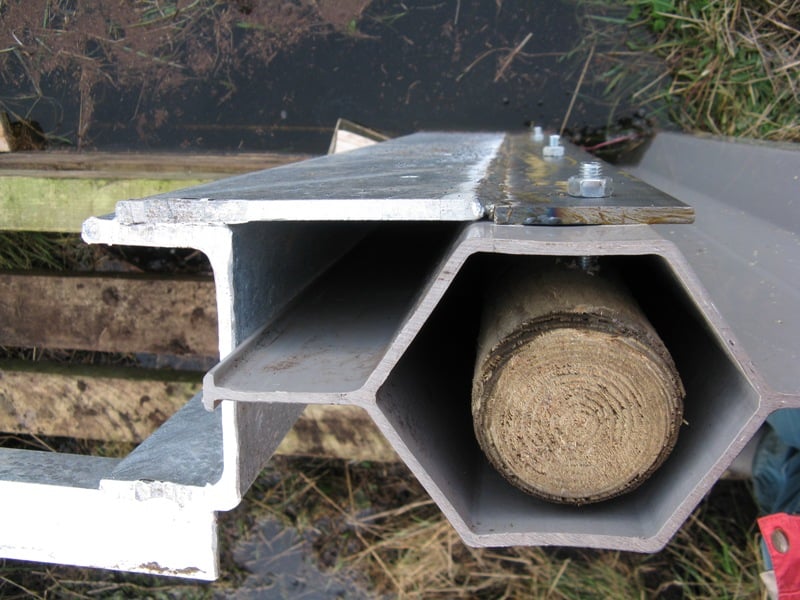 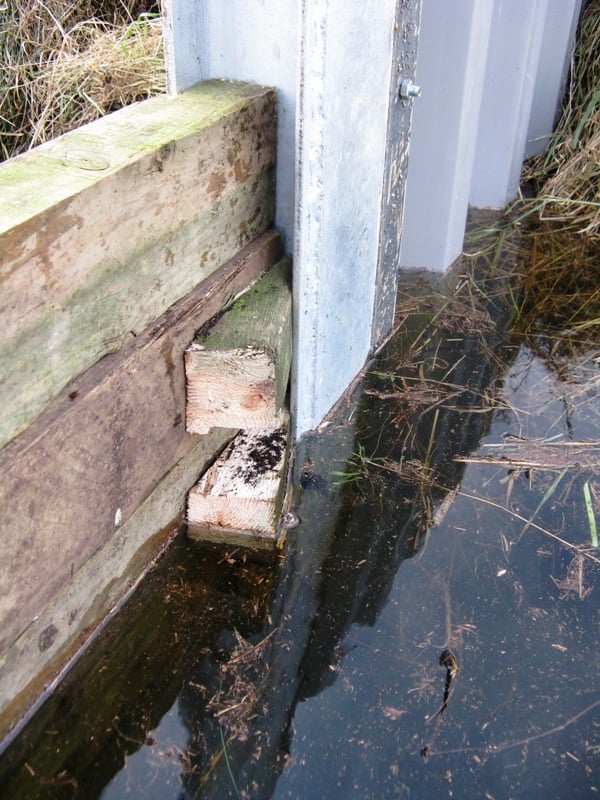 The recent installation of water level control structures on Doxey & Tillington Marshes Site of Special Scientific Interest (SSSI) were commissioned by Sow and Penk Internal Drainage Board (IDB) as part of the implementation of the Water Level Management Plan (WLMP) for the site.

This plan was produced in consultation with Sow and Penk IDB, Staffordshire Wildlife Trust, Natural England and the Environment Agency. The plan wass designed to provide water levels on site appropriate for the bird species for which the site was notified as a SSSI, namely Snipe, Redshank and Lapwing.  The work was conducted by Gnossall Contracts of Stafford and the design of the structures was by JBA Consulting. 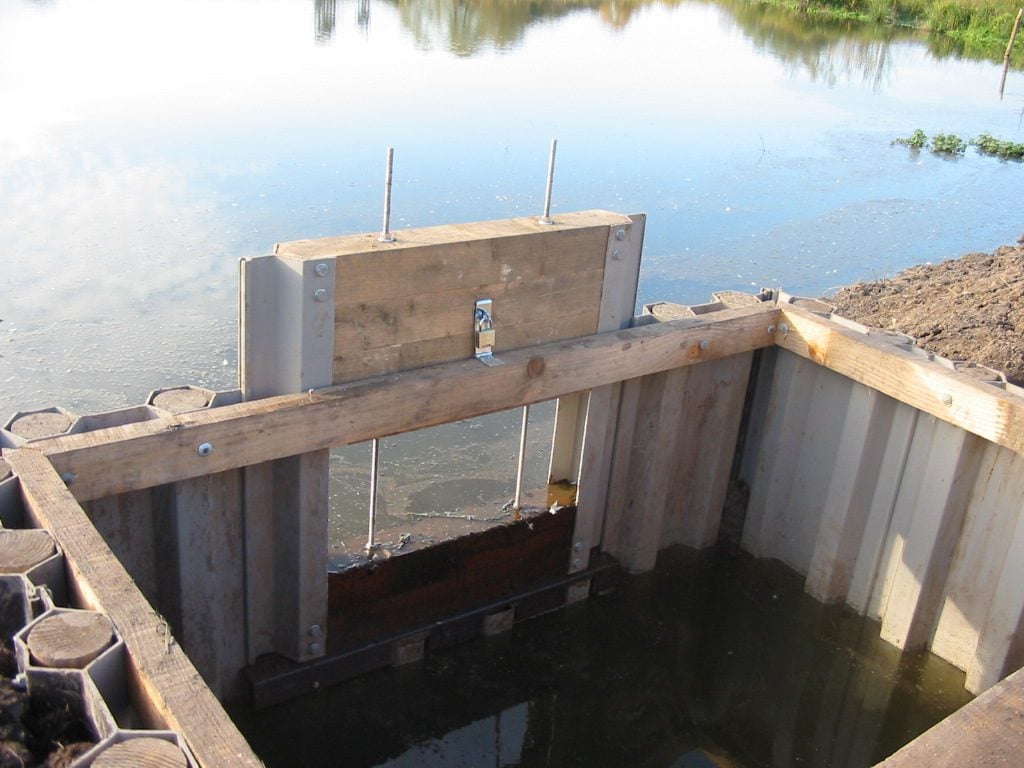 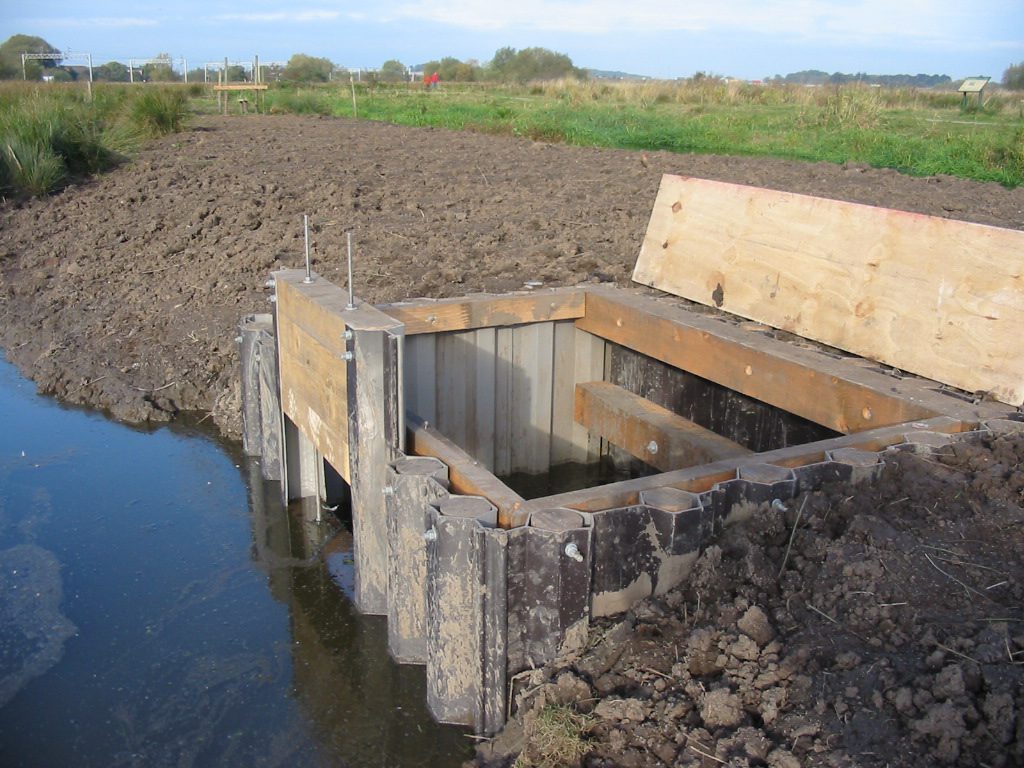 The following is extracted from the Case Study 9 Publication
Seighford Moor
[Management Approach: Water control structures & rotational maintenance ; Length Affected: 4220m] This extensive network of drains is associated with Seighford Moor, a large area (28ha) of floodplain grazing marsh / lowland meadow which, subsequent to a survey undertaken for Farming Floodplains for the Future, has been designated a County Wildlife Site.
Due to its important drainage function, the main course of the Millian Brook running through the site has continued to be maintained annually as it has been historically. However changes have been made in relation to the arterial drains.  Three water control structures have been installed at strategic locations to allow seasonal management of water levels, aimed primarily at enhancing biodiversity (both wetland flora and potentially breeding waders).
The structures comprise plastic sheet-piling dams incorporating an adjustable section that permits the holding of a high water level from December to May and a low level from June to November (to allow effective cutting and grazing of the site). Natural England part-funded the structures through the two Countryside Stewardship agreements under which the site is managed.

Based on analysis of the water level monitoring data (see ‘Monitoring’ box) undertaken by JBA Consulting (to Mar ‘10), it is concluded that the changes to in-channel vegetation   management regimes have not had a significant impact on either the water level or waterflows within the affected drains.

The introduction of water control structures on Deepmore Drain and Seighford Moor has clearly raised water levels within affected drains, such that during flood events there is earlier over-topping of water onto the floodplain (although any increase in flood storage is negligible). Records from dipwells in the centre of fields on Seighford Moor indicate that the structures effectively raise the water table across the peat-dominated site through the winter and spring months, to levels potentially beneficial to breeding waders.

Over 13km of watercourse have been maintained more sympathetically. It is anticipated that the increase in vegetation retention and associated habitat niches will result in better survival of a range of species, particularly flora and invertebrates.

The water control structures have allowed restoration and enhancement of some 59ha of floodplain grazing marsh at Seighford Moor and Radford Meadows – a recent survey of the  latter site has already suggested an increase in breeding waders.

Changes have been implemented without adverse impact on drainage function, with no major cost implications, and in a way that contributes to the Board’s environmental targets.

There has been no reported adverse impact on riparian landowners. Although both farmers associated with Seighford Moor already had Countryside Stewardship agreements, for one the land was managed under the grazed pastures (P1) option only.

Following installation of the water control structures, Natural England deemed this area to be eligible for the raised water level supplement (GW) (already received by the other farmer), earning an additional £1140 per year.

Whose Responsibility?
Riparian landowners are responsible for protecting their own banks, and have a legal right to do so. However anyone carrying out works on a river is responsible for any damage they may cause to third party interests. This is why advice and consultation is so important. Even where channel maintenance is carried out by the Environment Agency (Main Rivers) or by a Drainage Board, the channel and banks do not usually belong to them. Their powers are permissive and the work they undertake will be targeted at the common good rather than individuals.

Authorisations
Usually it is illegal to carry out any erosion control work without certain administrative preliminaries. On main rivers a formal consent must be obtained from the Environment Agency before work starts. They have expert staff who are usually pleased to advise on the engineering and ecological aspects of proposals. They publish a number of excellent booklets on the subject. Similar permission is required for works on Drainage Board watercourses. Contact the Clerk to the Board.

However the work is to be done, planning permission may still be needed. Any proposal involving the import of material from offsite may count as tipping and require a Waste Control Licence. If your site lies within an SSSI or other wildlife designation, other formalities will be needed.